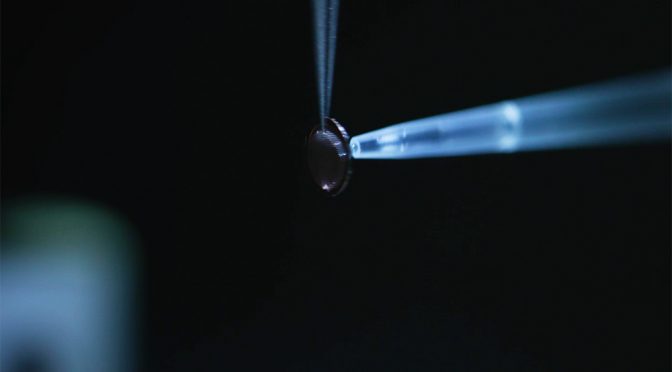 Unraveling molecular details of cell signaling could help develop new therapeutics. Using a new generation microscope, scientists pave the way towards the next potential breakthrough in a collaborative effort.

The electron microscope, Titan Krios, is more than three meters tall and weighs a ton. It is designed to operate at a temperature of up to -200 degrees Celsius in order to protect fragile biological specimen from the heat generated by electrons. That is why the technique is called cryo electron microscopy, or cryo-EM. Cryo-EM enables direct visualization of biomolecules at atomic resolution, including drug targets, where it has the promise of being especially powerful. It works by shooting a beam of electrons through a carefully prepared very thin layer of frozen biological specimen. Deflected electrons are then recorded by another game changing invention: an ultra-fast and sensitive camera that directly detects almost each single electron and consequently produces an image. This image is called a ‘micrograph’, and since the detected signal is low, to enable extracting a sufficient amount of meaningful information, scientists collect thousands of micrographs and combine them. Then using intensive computing, a 3D molecular structure is reconstructed to decipher the mechanism of action. It is this exquisite level of detail that can support the design of potential new medicines.
SciLifeLab identified the opportunity in cryo-EM early on, and acquired its first Titan Krios during 2015-2016. Gunnar von Heijne from Stockholm University was the initiator. He says: “We were lucky enough to realize the promise of cryo-EM shortly after the new technology of the direct electron detectors first came on the market. And a great deal of preparation was necessary to bring it to Sweden.”
Erik Lindahl, a group leader at Stockholm University, jointly with Sjors Scheres from Cambridge developed accelerated software for 3D reconstruction that was readily applied. Then experts from abroad, including Marta Carroni, were recruited to enable the Swedish academic community to start benefiting from the advances.
“With support from the Knut and Alice Wallenberg Foundation, the Family Erling Persson Foundation, SciLifeLab and Stockholm University we managed to get the first Scandinavian cryo-EM facility up-and-running promptly”, says Gunnar.
Thanks to the well-planned organization, it got off to a flying start. Olli Kallioniemi, the director of SciLifeLab, says: “Demand for access to the technology and services has quickly exceeded capacity.”

Collaborative hub
A young group leader Alexey Amunts was recruited from the MRC Laboratory of Molecular Biology in Cambridge through the SciLifeLab fellows’ program to establish the cryo-EM research. “The SciLifeLab fellows’ program is key for our infrastructure and the national research community to be at the cutting-edge globally”, explains Olli. “Young group leaders have been recruited to bring the latest technological expertise from the leading institutions, and Alexey Amunts is a prime example of this in the cryo-EM field.”
What does the program provide to the fellows? “It provides a supportive research environment, and SciLifeLab being a collaboration hub for different universities, offers unique opportunities to set up interdisciplinary partnerships with scientists from other institutions and industry. Therefore, being a Sci-LifeLab fellow, one can commit to long-term goals and big open questions, as well as technology development”, says Alexey.
One such partnership was launched with a prominent biopharmaceutical company, AstraZeneca, whose leaders believe that cryo-EM is set to become increasingly important in the discovery of novel drug targets and the design of candidate molecules. Tove Sjögren, head of the Protein Structure section at AstraZeneca R&D, who is supervising the partnership, describes it as an opportunity for her group. “Thanks to cryo-EM, the structural biology field has seen an incredible development over the past few years. By establishing a collaboration with the Amunts group from SciLifeLab, we have expanded our ability to access know-how and infrastructure in Sweden, which has provided a valuable advantage for us in our endeavours to advance drug discovery.”

Cryo-EM for drug discovery
The collaboration resulted in a study published in Science Advances, where scientists from AstraZeneca and Sci-LifeLab used cryo-EM to determine the structure of a protein complex including the extracellular region of the receptor tyrosine kinase RET.
Jenny Sandmark, a principal investigator from AstraZeneca and the leading author on the publication explains: “This study is about the mechanism by which the receptor tyrosine kinase RET can increase neuronal survival in degenerative diseases. Detailed molecular understanding of this signalling complex helps us reveal key interactions and selectivity of the protein components. Targeting those components in a drug discovery context may improve the survival of neurons.”
For the first time, cryo-EM showed how the protein ligand Neurturin can cause structural rearrangements to enable downstream signalling.
“We revealed that the two large RET monomers only come together at the last few residues before the transmembrane helices and dimerise on the membrane facing surface of Neurturin”, says Jenny. “This is an interaction that has not been observed before and explains why the assembly of six proteins is required for proper placement of the transmembrane helices, which is required for intracellular autophosphorylation of RET and signalling. In addition, this led us to propose mechanisms for how selectivity between different RET ligands is obtained and how these have the potential to give different cellular responses by triggering different signalling pathways.”
Alexey Amunts and his postdoctoral researcher Shintaro Aibara performed the cryo-EM analysis: “The key was having good access to the Titan Krios, because it allowed us to test new approaches more easily. This ultimately led to the development of a technical solution that resulted in more efficient data collection and processing, specifically tailored to the RET receptor that Jenny and her colleagues have been working on.”
Stimulation of neurons and improved neuronal survival by targeting RET signalling is one potential route to prevent progression of neurodegenerative diseases such as Alzheimer’s and Parkinson’s. In addition, the current research could be extended to additional disease areas, where improved cell survival is essential.
Jenny emphasises the critical role of the cryo-EM technique in pursuing those directions. “This structure of the RET extracellular complex already suggests that some of the molecular interactions will differ between the homologous signalling complexes, which may trigger studies of various effects induced by the different ligands.”
According to Tove Sjögren, the established partnership will be a great advantage in this regard. “We are currently in a phase where we are exploring the best use of cryo-EM for drug discovery. The present collaborative study is a good example where insight into the protein complex provides hypotheses for how to modulate the signalling using a therapeutic agent.”
Kaushik Sengupta, a scientific director at AstraZeneca, who was involved in setting up the partnership, describes why it has worked well: “Both collaboration partners are open and communicate effectively with each other, and established a trustful relationship early on. At AstraZeneca, we have biochemical expertise and this coupled with Alexey’s technical cryo-EM expertise is a perfect partnership. Alexey also supported the training of our former postdoc and the first author on the publication, Janna Bigalke, in his laboratory. It is the shared scientific focus and open collaborative approach that drives our projects forward.”

What future brings?
“Cryo-EM is expected to accelerate the successful enterprise of drug design and structural biology. The collaboration with AstraZeneca is an early step in this direction, and we are fortunate to be involved in such a promising growth”, says Alexey.
The collaborative research will also have wider national implications. Ratan Bhat, head of strategy and external innovation within Cardiovascular, Renal and Metabolism at AstraZeneca added: “Working with SciLifeLab enables us to access novel technology and innovative science. And it is the interaction with their scientists that we particularly value, because it often provides an innovative thought pathway to address our scientific queries.”
Olli Kallioniemi emphasizes that it also illustrates how SciLifeLab fellows program contributes to technology development, collaborations and new service capabilities, “It further increases the critical mass and international standing of cryo-EM at SciLifeLab and in Sweden as a whole. And we will soon see major update and upgrade of the SciLifeLab cryo-EM facility”, he summarizes.

SciLifeLab och AstraZeneca
SciLifeLab
SciLifeLab is a joint enterprise of Swedish universities, that aims to provide frontline technologies for the Swedish academic community and develop cutting-edge research programs. Situated on the expanding Stockholm biomedical campus, SciLifeLab offers the opportunity to work in an internationally competitive and synergistic environment. The center combines technical expertise with advanced knowledge of translational medicine and molecular bioscience.
www.scilifelab.se

AstraZeneca
AstraZeneca is a global, science-led biopharmaceutical company. Its R&D is concentrated mostly in Gothenburg (Sweden) and Cambridge (UK). AstraZeneca has a portfolio of products for major disease areas including cancer, cardiovascular, gastrointestinal, infection, neuroscience, respiratory and inflammation.
www.astrazeneca.se